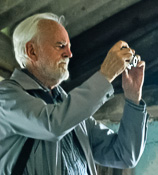 Guy died on 27 January 2013, aged 87. He was involved with the Chiltern Society’s PhotoGroup from its earliest days, helping to establish it when he took on the job of secretary in 1991. He guided its development with John Wellsman and Don Brooks and was chairman from 2003 until he retired from the position in 2012. During those years the Group’s archive grew from an initial collection of 200 to more than 5000 photographs of the Chilterns, a key resource for the Society.

Born in North Harrow, Guy attended the Harrow County School for Boys and went on to study physics at Cambridge and Birkbeck College. At Birkbeck he joined the climbing club where he met his future wife, Betty. During his working life he was in the computer industry until the 1970s when he changed course and taught music, an abiding interest since his student days.

One of Guy’s lasting legacies was to establish and help maintain the Chiltern Society PhotoGroup library. Donated collections, showing aspects of Chilterns life during the past 50 years or so, formed an historic base for the library. In recent years it grew considerably, benefiting from the many hundreds of photographs taken by members following photoshoots in specific locations, or from individual projects. Today the archive covers around 175 locations and, backed by an easily accessible website, is recognised as the most comprehensive published pictorial record of the Chilterns. Guy contributed more than 300 photographs to the library; click here to see them.

Guy was always keen to promote PhotoGroup members’ work and he took the lead in arranging exhibitions of their photographs, originally displays of prints around the Chilterns, and later online. His initiatives included publishing a small magazine for members and the Puzzle Picture feature in Chiltern News. Guy recognised the importance of providing a social forum for members: winter indoor meetings and summer pub lunches on outings became increasingly popular.

Guy’s involvement with the Chiltern Society’s PhotoGroup, its Planning Group and the Executive Council will be long remembered.

The photographs of Guy’s funeral were taken by Terry Cherrill at the Chiltern Woodland Burial Site near Beaconsfield. A number of Society members attended including those in the first group photo.